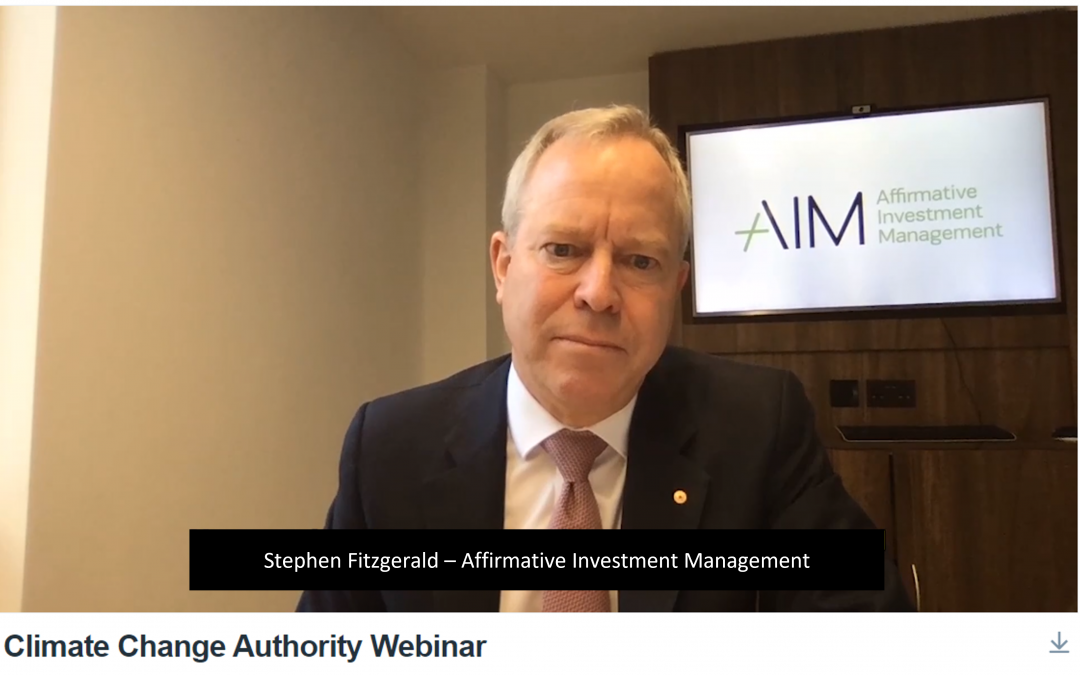 As the world progresses towards achieving net zero emissions, governments, investors and consumers will increasingly favour lower emissions products. Decisions in one part of the world will reverberate along global supply chains, presenting challenges and opportunities for countries around the world.

At COP26 the Australian Climate Change Authority (CCA) hosted a panel to launch a new report, Trade and investment trends in a decarbonising world. The report presents insights into how Australia can respond by viewing reducing emissions not as a cost but as a source of competitive advantage.

Stephen Fitzgerald, AIM Managing Partner joined the panel along with speakers from the private and finance sectors, to discuss what it will take for Australia to continue to prosper in a decarbonising world.

Stephen Fitzgerald’s formal remarks emphasised the critical role and unprecedented opportunities that the finance sector will have in financing the transition to a net zero world. Stephen also underlined the importance of a fair and just transition, essential to not destabilizing the most vulnerable people and societies.

You can read Stephen’s speech below:

The Intergovernmental Panel for Climate Change in August 2021 painted a sobering picture of the efforts made thus far in the world’s efforts to reduce GHG emissions.

This recognition has led to an acceleration of the efforts to achieve Net Zero 2050 with commitments from both governments and the private sector.

The finance sector has a critical role to play in this transition and has accelerated its focus led by organisation such as the UN PRI. . It is the finance sector that will fund the transition. For asset managers and asset owners, the commitment to net zero is different to ESG investing – it is a commitment to re-focus portfolios on achieving the transition to net zero. It is forward looking and focusses on positive selection of leaders in that transition. This alliance is about ambitious targets, hard action plans and transparent measurement. It will, however, lead to companies and/or governments that lack ambition or metrics being excluded from the investment universe. The transition and the capital flow to support it will be the single largest opportunity for investment markets – both debt and equity – of our lifetimes.

The estimated cost of the transition to net zero is US$4 trillion per year or a total of US$120 trillion. The net zero commitment from asset managers alone now stands at US$50 trillion. When combined with other financial sectors through the Glasgow Financial Alliance for Net Zero we will be getting close to the total required to finance the transition.

Investors are already demanding change. You see that in their investment choices: the rise of climate solution funds; the introduction of carbon budgets in conventional equity portfolios; the rise of the impact bond market. The impact bond market will see over US$1 tr of new issuance in 2021 across green, social and sustainability bonds. Investors are also becoming more sophisticated in their decision making – assessing both the issue itself and the use of proceeds and also the issuer through an ESG lens which includes the issuer’s forward-looking commitment to net zero. Issuers that lag will be excluded and that includes sovereign bonds. At AIM we have excluded issuers based on their ESG standards, especially around support for the most polluting industries and lack of a transition plan. It is also Scope 3 emissions that count and for countries this includes the emissions facilitated by their exports. For issuers that are leaders there is real opportunity – the recent Spanish Green Bond was 12x over-subscribed. The recent Green UK Gilt was the most heavily over-subscribed Gilt ever. At AIM we have developed clear criteria for assessing debt at both the issue and issuer level, as well as evidencing the impact through project level impact assessment. We engage with issuers to ensure they deliver on their commitments.

In equity markets, investors play a role through their investment selections, by exercising their voting rights and through engagement. The equity opportunities are in the enabling sectors such as technology around net zero but also in the equity of the leaders in transition through higher market share, higher valuations and lower risk premia, as well as more sustainable business models. The recent Climate Action 100 was the largest ever investor to company engagement process: 615 investors, covering US$60 trillion in AUM, engaged 167 companies, including the world’s 100 largest emitters. It had a clear focus – companies must set net zero targets and demonstrate a plan on how they will decarbonise, including 2050 and also 2030 plans. It focused on Scope 3 emissions, their future capital and investment plans, as well as tying remuneration to the delivery of net zero.

In the run up to COP, these 615 investors wrote to governments around the world to say they support the transition to net zero and were ready to allocate capital. Their request to governments were 2030 plans and policies to deliver targets, including but not limited to: Commit to mandatory climate risk disclosures aligned to TCFD’s.

The opportunity is vast. The amount of capital that is to be allocated to net zero is unprecedented. There will be both debt and equity opportunities in technology that enables the transition but also to support companies in hard to abate sectors. We have developed models to identify leaders in these sectors as part of the launch of transition finance portfolios.

Also critical is that the transition is a ‘fair and just’ transition. The short-term impacts of transition, through the inevitable higher energy prices or decommissioning fossil fuel, often fall on the most vulnerable societies or the most vulnerable in society. We must ensure there are mechanisms in place to protect these peoples and countries.